AMMAN, JORDAN—In the small town of Marka, Jordan, about 20 minutes from downtown Amman, hundreds of Christian refugees and their families live under the steadfast care of Father Khalil Jaar, a humble priest originally from Bethlehem.

Here, at a small church complex called St. Mary’s, children receive an education. On this particular Sunday, French missionaries have baked fresh apple tarts for the parish’s luncheon. The surrounding community, including both Muslims and Christians, is welcome to attend. 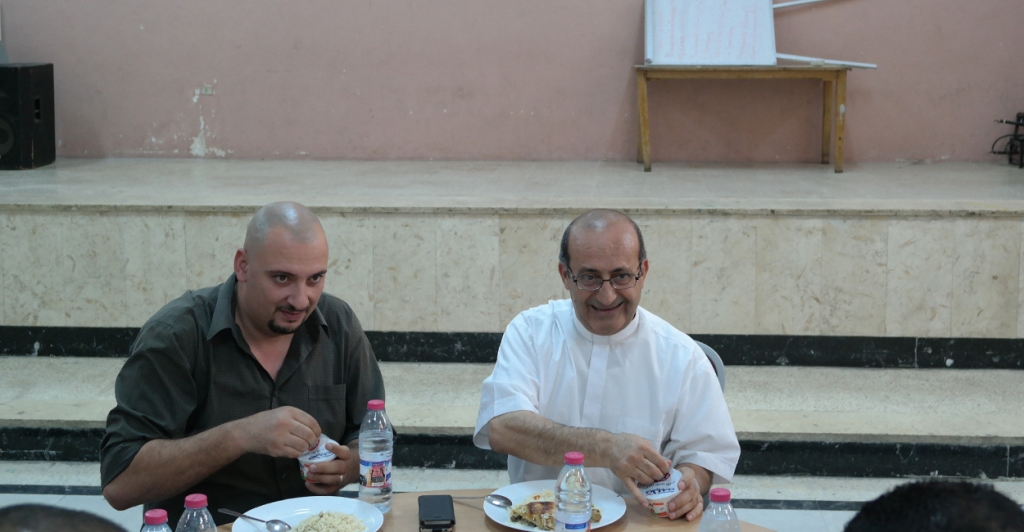 Many refugees have lost family members, homes, and their entire life savings. But in a situation defined by destitution and loss, hope and faith abound.

St. Mary’s, situated in low-income Marka, cares for more than 500 families in need from Syria, Iraq, and even Jordan.

In particular, Iraqi refugees, fleeing towns overrun by ISIS—such as Mosul, Iraq—come to Jordan seeking asylum. Some refugees say Jordan is a transit stop to a better life in the West.

And while tragedy may have brought them to Marka, the families here are reminded that despite their tremendous loss, individuals such as Father Khalil will not let the world ignore their plight. They remain resolute that ISIS cannot take away their dignity.

The Plight of Iraqi Christians

Today, some 2,200 Iraqi Christians are living in Jordan, largely due to an agreement secured last year between Father Nour al-Qusmusa, an Iraqi priest living in Jordan, and King Abdullah and the Jordanian government.

Under the agreement, Father Nour is allowed to sponsor Iraqi families directly, providing them with aid through Caritas, a Catholic charity operating in Jordan.

Unlike Syrian refugees entering Jordan, Iraqi refugees must obtain a visa or find family or church sponsorship before arriving in Jordan—a process that is often lengthy and expensive. While the Iraqi refugees are a significantly smaller group as a whole compared to Syrian refugees, there are no camps and no official aid programs for the exodus of Christians from Iraq that began in the Summer 2014. 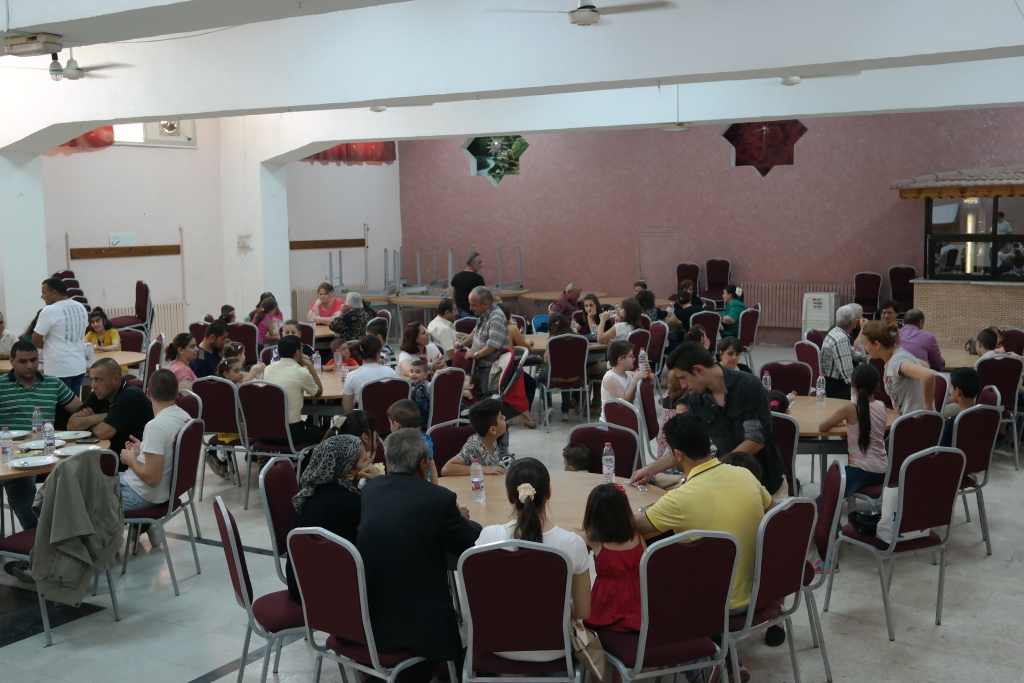 At St. Mary’s, the stairwell leading up to Father Khalil’s modest office is filled with donations from the local Jordanian community and includes clothes, toys, and small furniture items. Father Khalil even gave up his original office to house an Iraqi family under his care on the parish grounds.

Currently, nine families live in makeshift rooms on the parish compound. The rest live in apartments around Marka, often two families per apartment.

Father Khalil’s operation helps support these families by providing money for rent or a portion thereof and food assistance. While many Iraqi refugees are highly skilled workers, they are not allowed to legally work in Jordan, forcing many to burn through what little savings they were able to hide when they fled ISIS.

Father Khalil has also instituted an innovative system of assistance with the dual purpose of allowing families to make their own economic decisions. Essentially a voucher system, the arrangement, according to Father Khalil, “allows the families to maintain their dignity” but also provides him with the data needed for donors interested in making donations in kind.

The system has become so successful that many non-governmental organizations in Jordan have sought Father Khalil’s counsel for their own programs. Father Khalil also finds it important to develop an image of the church that gives not only financial support, but also faith and love, stating that if children only see him giving money, that is all they will know the church to be.

The resilience of families living at St. Mary’s is apparent, nowhere more so than in the children under the care of Father Khalil—whose policy is that education comes before anything.

Father Khalil is determined to ensure that refugee children at St. Mary’s have a future, and he frequently states that the best answer for achievement is education.

He has worked to maintain the educational system the Iraqi children in his care are accustomed to by establishing an informal school in the afternoons after the church’s parochial school is finished.

Classes in the afternoon for Iraqi children are free and are taught by Iraqi refugees who were schoolteachers back in their homeland.

Father Khalil, through donations, provides the space, books, supplies, and snacks for the children. 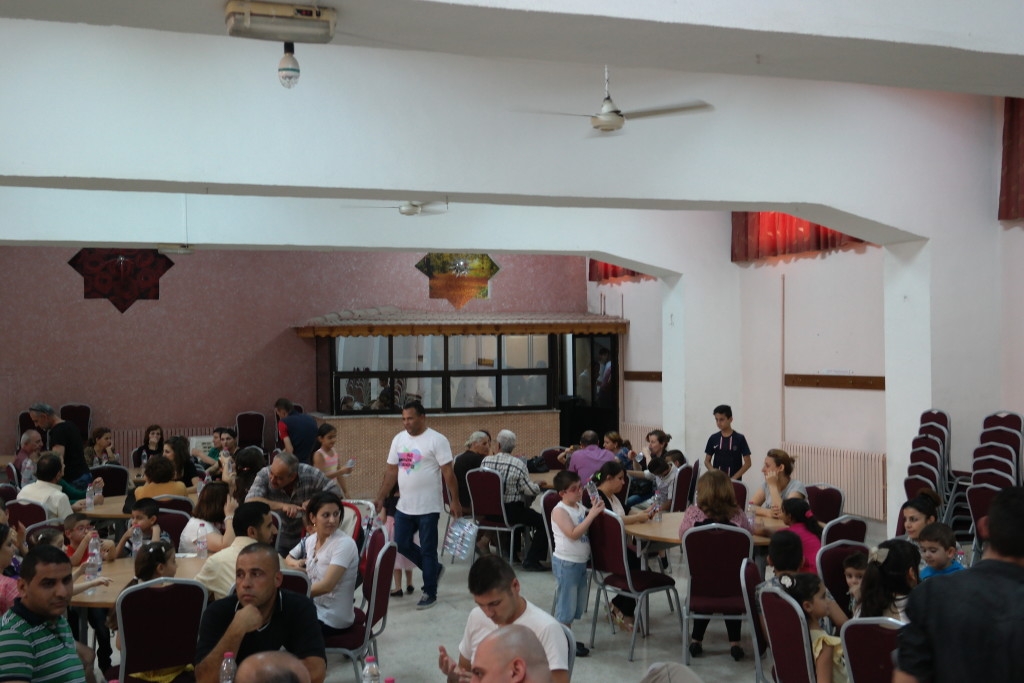 ‘To Find a New Place to Live in Peace’

In an interview, one Iraqi Christian living in Amman named Qahttan, who asked that his last name be withheld from publication, shares how after a year of supporting himself, his wife, and his young son in Jordan, he has very little money left.

“Being forced to leave Iraq and living in Jordan without a job has been the ultimate tax on my family,” Qahttan says via a translator.

Qahttan is a highly trained engineer who fled Iraq a little over a year ago. He fears he will have to leave his family and return to Iraq to find employment, as it is the only place he can legally work.

Qahttan says that despite part-time job offers, he refuses to work illegally because it could jeopardize his family’s visas. Qahttan expresses his concern for the future, and the thought of his wife and son being sent back to Iraq nearly brings the young father to tears.

While Qahttan considers himself lucky not to have lost any immediate family members to conflict, his extended family has not been so fortunate.

“All my memories in my country are related to sad memories,” he says.

Indeed, ISIS fighters killed Qahttan’s 23-year-old cousin and his children. The horrific experiences of the fellow Iraqis he has met since arriving in Jordan have made him never want to go back.

When asked if he would return to his home in Iraq if ISIS were destroyed, Qahttan says he has no desire to do so, noting it was not even ISIS that destroyed his friend’s home in Mosul, but his friend’s lifelong neighbor, who happened to be Sunni and got caught up in the radical sectarian turmoil.

Individuals such as Qahttan remain in limbo. Iraqi Christians have lost their homes and history and have been left without a place to rebuild.

While the reality seems grim, passionate individuals such as Father Kahlil are helping to keep Iraqi Christians afloat. Even still, Father Kahlil will be the first to admit that significantly more must be done to ensure that the Iraqi community—and especially their children—have a welcoming home to rebuild and a future beyond war.

“I am no longer committed to my country’s future,” Qahttan reflects, adding: “My only concern to find a place to live in peace.”