Open Doors: Syria and Iraq are ‘the tip of the iceberg’ – there has never been a worse time to be a Christian

Previous Next
Open Doors: Syria and Iraq are ‘the tip of the iceberg’ – there has never been a worse time to be a Christian

There has never been a worse time to be a Christian, according to persecution charity Open Doors who will launch their annual report this afternoon.

“Global persecution of Christians is more extreme than ever before,” the charity said in a statement ahead of publishing its 2016 World Watch List. The list highlights the 50 countries with the worst persecution record and will be discussed at a launch event at the House of Commons later today.

Lisa Pearce, Open Doors’ CEO, said the rapid rise was a “cause of great concern” and urged the UK government to do more to protect Christians around the world.

“The trend is stark, as are the consequences for real people – we should not expect that to change unless we are part of changing the situation.

“As a key voice within the international community and a generous provider of aid to a number of the countries on the 2016 World Watch List, I urge our government to do everything possible within their spheres of influence to affect what happens next. We will not get these days back.”

North Korea remains top of the list as the worst place to be a Christian according to Open Doors, with 70,000 Christians estimated to be held in brutal labour camps.

Elsewhere, ISIS’ ongoing brutality means Iraq has replaced Somalia as the second most dangerous place to be a Christian. Eritrea comes in at number three and, according Open Doors, is “nicknamed the ‘North Korea of Africa’ due to high levels of dictatorial paranoia.” 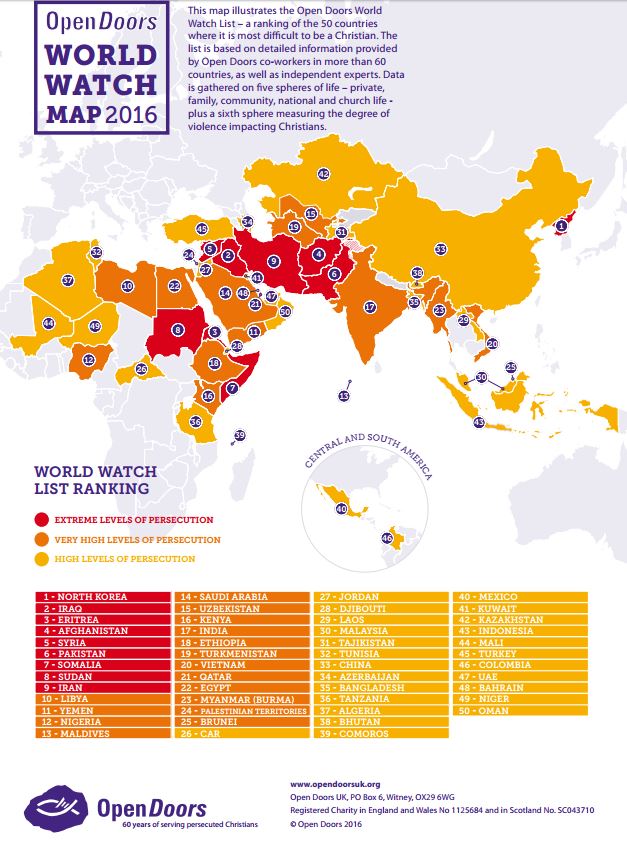 “Syria and Iraq are the tip of the iceberg,” the charity said. More people are killed for their faith in sub-Saharan Africa than anywhere else in the world.

“As fundamentalism in the form of radical Islam spreads across Africa westwards from Somalia, almost every country from Kenya upwards is affected,” a statement read. “Eritrea, Kenya and Ethiopia have all seen sharp rises in persecution levels.”

Dr Ronald Boyd-MacMillan, Director of Research at Open Doors International, said this was to ensure persecution levels around the world are measured as accurately as possible.

“It is possible for persecution to be so intense in all areas of life that Christians fear to witness at all,” he explained. “And so you may find very low levels of violence as a result since incidents of persecution often result from acts of witness”.