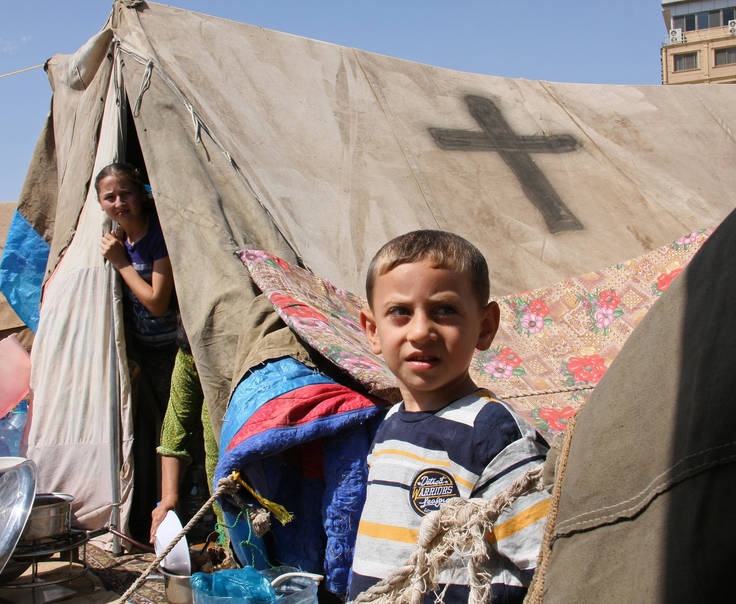 Only one of the 483 Syrian refugees admitted by the United States to date was Christian, although Christians are estimated to comprise 10 percent of the Syrian population. Photo: Open Doors

Despite suffering from emotional and physical fatigue themselves, Christians in Lebanon are experiencing Christ’s presence as they continue to minister to refugees traumatized by the actions of Islamic extremists.

According to UNHCR, Lebanon has the highest percentage of Syrian refugees relative to its estimated population of 5.8 million people – at least 25 percent, counting hundreds of thousands of unregistered Syrian refugees in addition to the 1.1 million registered ones.

Over the past several months, innocent Syrian refugees living in the country have suffered an upsurge in attacks, police raids on camps, evictions and discrimination due to a growing fear of jihadist ties. Syrian refugees say they have been beaten on the street in the name of “national security” and that many towns have imposed curfews on them – even though none of the arrests have unearthed any terrorist activity.

“There is a rising trend of not just harassing refugees out of revenge, but terrorizing an entire population,” one rights advocate told the World Politics Journal.

According to Christian Aid Mission, Ali, a Syrian refugee who fled Raqqa, Syria with his family was denied entry into Lebanon when officials speculated that he was dodging military service, and he was detained for two weeks while his wife and two young children had to continue on.

After reuniting with his family in Lebanon, Ali learned that he had been given false residency papers, and he was sentenced to two months in prison with a high likelihood of deportation.

“Ali was treated badly in prison, and the family ran into debt trying to get him released early,” a ministry leader told CAM. “Ali’s wife had a miscarriage and struggled with depression, and we stepped in.”

The ministry quickly took his wife to see a doctor and assisted them with rent payment, food packages, diapers and blankets: “Please continue to lift this family up as they continue to struggle financially and emotionally,” he said.

Such cases are all too common in Lebanon, prompting ministry workers to ask for prayer as they continue to care for the overwhelming number of refugees.

One emotionally fatigued worker revealed he recently encountered the Lord, awaking at 3 a.m. with an clear sense of Christ’s presence.

“His faith was strengthened and renewed,” the director said. “He is faithful in sharing Christ with his family and neighbors, and we ask for continued prayers for him. He and his wife have also recently had a baby girl. Let’s remember to pray for his family.”

Another ministry worker, though illiterate, has started five prayer groups for women – she uses audio media to share the gospel – and God has used her in remarkable ways, the director said.

“She doesn’t cease to share the love of Christ with those that she encounters, and we know the only explanation for how she can do all this is the Holy Spirit,” he said.

Another Muslim man who recently put his faith in Christ under the ministry’s influence decided to return to the community where he grew up in south Lebanon to share the Gospel despite extreme dangers.

“He is a fisherman with a heart for God and an eagerness to minister to his people, no matter how dangerous it may be,” the ministry leader said. “He presently has eight people meeting daily in his home for prayer. There is currently no funding for him and his ministry there, but he continues with what he feels God wants him to do. The cost is so high for him, but he persists and cares so deeply for his neighbors, family, and friends.”

Two ministry workers recently said they received a divine call to stop waiting for refugees to come to them, but rather to go to Syria to proclaim Christ – even though both are illiterate. They revealed they use audio media to share the gospel with others.

“When asked why they are going when it is so dangerous, they responded that they just can’t wait for others,” the director said. “The love of Christ burns inside them, and they are ministering to many people that have never heard about Jesus. They know people need Jesus, and they don’t let anything stop them from sharing the good news.”