‘The World Has Failed To Protect Us’: Assyrian Christians Despair As ISIS Destroys Ancient Pyramid In Iraq

Previous Next
‘The World Has Failed To Protect Us’: Assyrian Christians Despair As ISIS Destroys Ancient Pyramid In Iraq

ISIS has destroyed one of the ancient wonders of Iraq by bulldozing the ziggurat pyramid in Nimrud, once the capital of the Assyrian empire stretching from Egypt to parts of modern-day Iran and Turkey.

The discovery of the destroyed temple came as Iraqi troops announced on Sunday that they had liberated Nimrud, and were expected to check the archaeological site for mines and booby traps before opening it up for experts to inspect the damage.

Satellite images published by the Times show that the temple, which dated back 2,900 years and towered over the surrounding desert, was flattened between August and November.

The ziggurat was known as one of the most spectacular sacred structures from ancient Mesopotamia. It was once 60m (200ft) high and wide, though more recently its remains were measured at 42m in height.

The pictures also show what the Times report described as “an enormous hole” where the site’s main palace and its collection of Assyrian friezes once stood.

Yakoub continued: “The Assyrian nation has survived countless attacks, massacres and genocides throughout history, this recent destruction saddens us but it also makes us more determined to fight for our survival as a nation.”

Nuri Kino, founder and president of campaign group A Demand For Action, told Christian Today that he had spoken this morning to an Assyrian man who fled Mosul in 2014.

The man said: “We knew the destruction would be more than we believed before but… when the news came about Ziggurat it felt like torture. I don’t think people understand what the world is losing here, maybe we need to compare the loss to if something would happen to the pyramids in Egypt.

“ISIS has destroyed a treasury that is thousands and thousands of years old, this is a crime to humanity, they need to be held responsible for their crimes. They are destroying the cradle of civilisation.”

A report from the American Schools of Oriental Research confirmed: “Imagery dating to early October shows the almost complete levelling of the ziggurat mound, with the majority of damage occurring between August 31 and October 2, 2016”.

The commander of the Mosul operation, Lt Gen Abdul-Amir Raheed Yar Allah, said troops had re-taken Nimrud which was seized by ISIS in 2014, after heavy fighting. He released a statement saying that “the 9th division of the Iraqi army has liberated the town of Nimrud completely and raised the Iraqi flag over its buildings after the enemy suffered heavy casualties”.

The soldiers also captured the village of Numaniya, on the edge of the city.

Nimrud was first bulldozed last year as part of what the Iraqi government says is a campaign by ISIS to destroy symbols that militants consider idolatrous.

Unesco described the act as a war crime, while activists, officials and historians condemned ISIS at the time for the destruction of the ancient Assyrian archaeological site.

Nimrud – which lies on the eastern bank of the Tigris river, around 20 miles south of Mosul – was first excavated in the 1840s by the British explorer Austen Henry Layard.

Many of the site’s relics are in the British Museum as well as the Metropolitan Museum in New York and Iraq’s national museum in Baghdad. 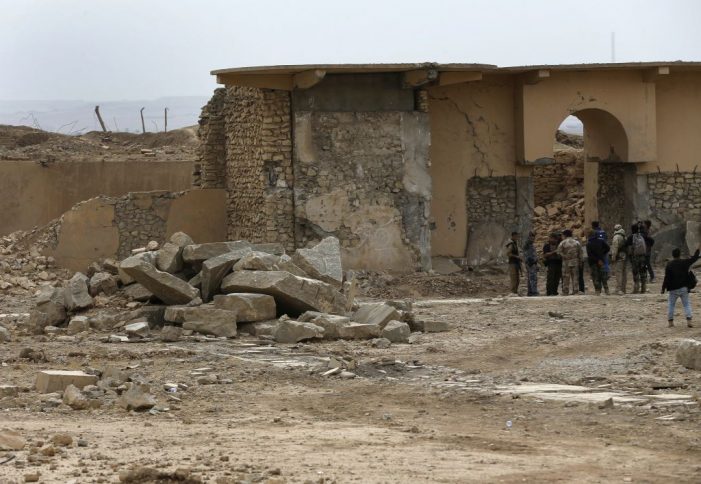 Iraqi soldiers and journalists gather at the damaged ancient site of Nimrud, which was destroyed by the Islamic State militants, southeast of Mosul, Iraq, November 16, 2016. (AP/Hussein Malla) 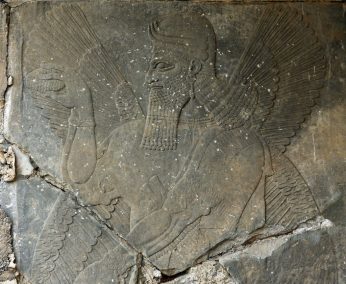 Part of carved stone slabs which were destroyed by the Islamic State militants, is seen at the ancient site of Nimrud, southeast of Mosul, Iraq, November 16, 2016. (AP/Hussein Malla) 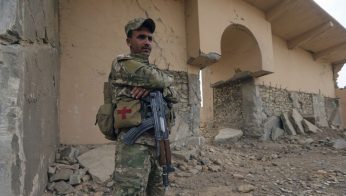 An Iraqi soldier stand guards at the entrance of the ancient site of Nimrud, which was destroyed by the Islamic State militants, November 16, 2016. (AP/Hussein Malla) 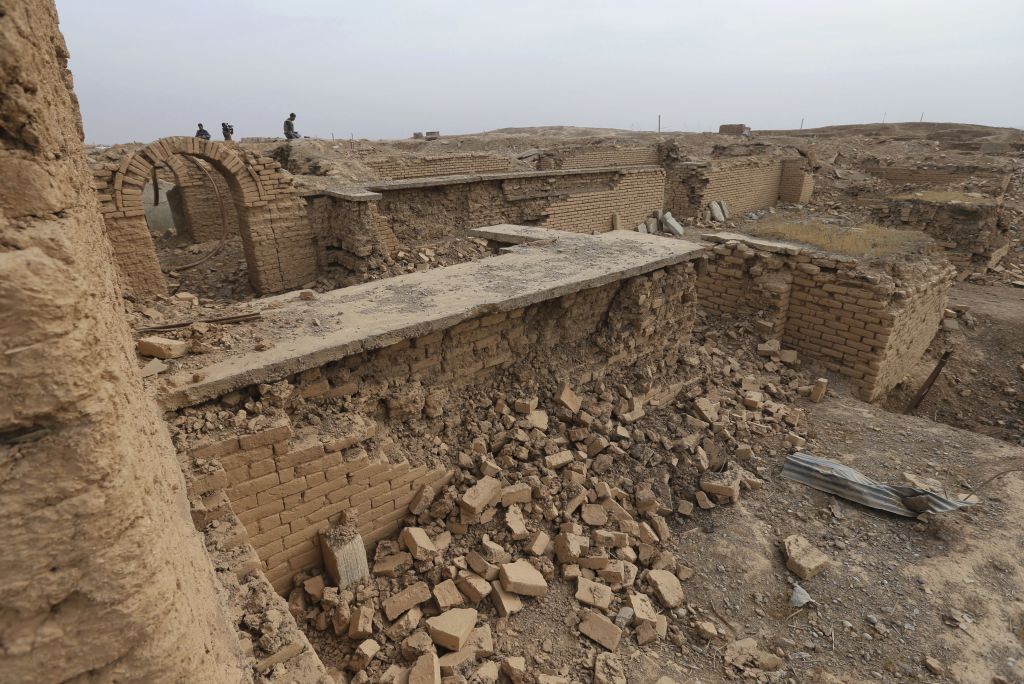