Previous Next
Churches Reconcile 500 years After Start of Protestant Reformation

AMMAN — In a joint prayer service in Amman on Monday, Lutheran and Catholic church leaders celebrated and gave thanks together for the two churches’ rapprochement after 50 years of ecumenical dialogue.

During the special service, held at the Good Shepherd Evangelical Lutheran Church, priests from both confessional communities read statements of regret for letting their theological differences to cause  pains and suffering to the other and  for building walls of prejudices and alienation towards each other.

Almost 500 years ago, Martin Luther initiated the Protestant Reformation, which changed the practice of Christianity worldwide.

But in October 2016, Pope Francis and Bishop Munib Younan, president of the Lutheran World Federation, signed a joint statement, in which Catholics and Lutherans pledged to continue pursuing dialogue in order to overcome obstacles to achieve full unity.

Reverend Pierbattista Pizzaballa, the apostolic administrator of the Latin Patriarch of Jerusalem and Bishop Munib Younan, bishop of the Evangelical Church in Jordan and the Holy Land, addressed the gathering on Sunday with statements assuring unity and commitment to more theological dialogue, more visible unity and joint witness for the Gospel of Jesus Christ. 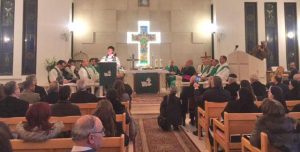 “Our parishes, our schools, our hospitals, our orphanages, our homes for… [people with disabilities] and our social programmes serve all, Christians and Muslims, locals and refugees, young and old,” he said.

The reverend said that the two churches should continue their pursuit of unity and fight division.

Younan said the event was important for the two churches as they commemorated the 500th anniversary of the beginning of the Reformation, while now reaping the fruits of dialogue — mutual understanding, cooperation and respect.

“Who expected such a service of joint prayer to take place today [Sunday] in Jordan, and later in Palestine?” he asked.

The bishop said the two churches made five commitments that are hoped will lead to full unity: avoid division; repent of the sins of the past and the pain the churches caused to each other; witness together the Gospel of Jesus Christ; work for justice and peace; and pledge to serve humanity.

On the sidelines of the event, the Apostolic Nuncio to Jordan and Iraq, Archbishop Alberto Ortega, told The Jordan Times that the joint prayer service is important on two levels: unity of the body of Christ worldwide on the one hand, and Christians praying in unity for the wellbeing of Jordan on the other.

Synod president of the Evangelical Lutheran Church in the Holy Land, Samer Azar, told The Jordan Times that after five decades of dialogue since the second Vatican Council, a new era has started, replacing conflict with communion.

Among those gathered was Suha Haddad, who said that such unity brings comfort and joy to the hearts of the churches’ followers and peace to those who believe in peace.