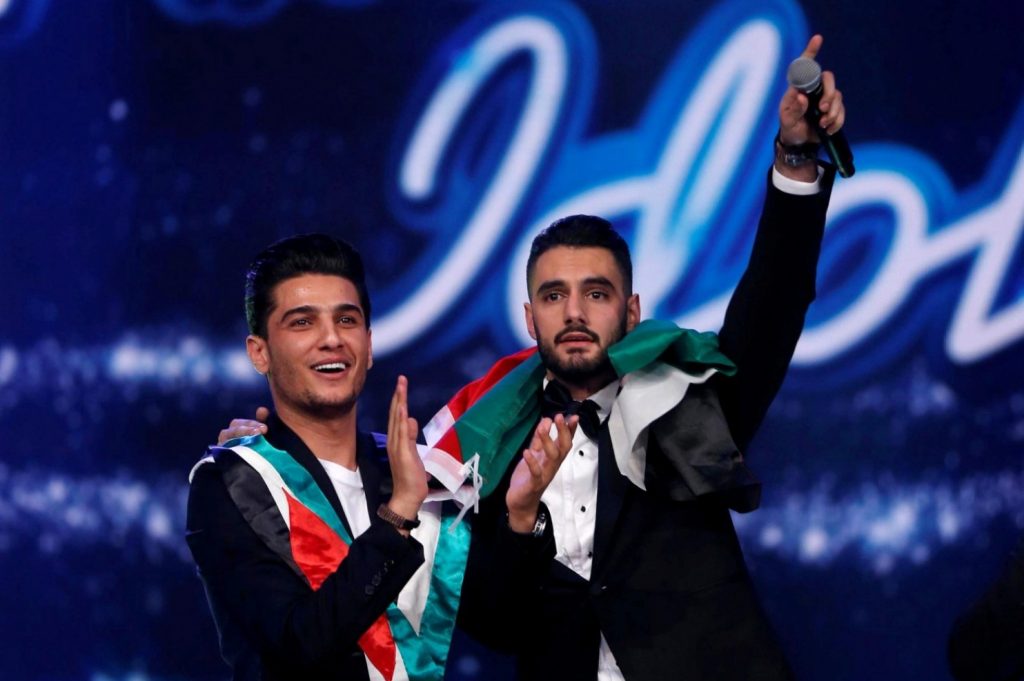 Yacoub Shaheen, right, celebrates his victory in the finale for Season 4 of the “Arab Idol” program. Season 2 winner Mohammed Assaf accompanies him. (Reuters)

BETHLEHEM, West Bank — Thousands gathered in the holy city’s Manger Square late Saturday night to watch one of their own win the “Arab Idol” song contest, the wildly popular ratings monster that brings the Middle East to a standstill as millions tune in.

The winner was Yacoub Shaheen, a Palestinian and member of Bethlehem’s small community of Christian Assyrians.

The glitzy talent show on Dubai’s MBC1 is based on the British show Pop Idol and its American cousin. Viewers use their mobile phones to vote via text message and winnow down the contestants, who began singing their hearts out in weekly installments, heavy on backstory, back in November.

The streets of Bethlehem were packed with cars brandishing flags supporting Shaheen and blasting his pop songs from stereo speakers. The coffee shops and shisha cafes were filled with cheering viewers. Local youths had tagged the sides of buildings with graffiti reading “Suryoyo,” for “Assyrian” in the ancient language of Aramaic.

At Manger Square, just steps from the Byzantine-era Church of the Nativity, built above a cave where the faithful believe Jesus was born, crowds filled the plaza to watch the fourth season’s climax on a jumbo screen.

Saturday night’s finale featured a three-way showdown between Shaheen and the Yemeni crooner Ammar Mohammed and Ameer Dandan, a Palestinian from the Arab village of Majd al-Krum in Israel’s Galilee.

After winning, Shaheen came on stage at the studio theater in Beirut, wearing the Palestinian flag around his shoulders. He sang a patriotic anthem with the lyrics: “My pledge and my oath, my blood is Palestinian,” Reuters reported.

Shaheen follows in the footsteps of the 2013 “Arab Idol” winner, Mohammed Assaf, from a Palestinian refugee camp in the Gaza Strip, who is now one of the biggest stars in the Arab World.