‘There Are No Girls Left’: Syria’s Christian Villages Hollowed Out by ISIS.

Previous Next
‘There Are No Girls Left’: Syria’s Christian Villages Hollowed Out by ISIS.

TEL TAL, Syria — The memories of the retired oilman dot the village in Syria where he grew up. The mud chapel he got married in. The concrete church he helped build that would overflow with worshipers on holidays. The tight community of Assyrian Christian families who had lived together in this area for generations.

Now it’s a village of ghosts.

The church is a pile of rubble, its bell tower and its cross toppled over like a felled tree. The dirt paths are overgrown, walked by stray dogs. Most homes are empty, their owners in Germany, Australia, the United States and elsewhere.

“All the houses used to be full,” said the oilman, Ishaq Nisaan, 79. “Now on my street, it’s only me and my neighbor.”

The same fate has befallen all the surrounding villages, where Assyrian Christians, one of Syria’s many religious minorities, had long farmed and raised animals along the banks of the Khabur River in the country’s northeast.

The Islamic State attacked the area in 2015, kidnapping more than 220 residents. The jihadists were pushed out a few months later by Kurdish forces and local fighters, and released most of the captives after receiving exorbitant ransoms.

But the extremists demolished many of the area’s churches before they left, and almost all of the freed captives, along with their families and neighbors, have since fled, hollowing out the community.

“Life here is very nice, but there are no people,” said Ramina Noya, 23, a member of the local council governing the area. She stayed, but most of her relatives are in the United States.

Seven years of war in Syria have displaced half the country’s population and sent millions of refugees abroad. As the government of President Bashar al-Assad reclaims more territory from the rebels who sought to oust him, some people may return.

But other vulnerable communities, like the one here in Tel Tal, were so traumatized that they may never recover, leaving permanent holes in Syria’s social fabric.

The number of Christians across the Middle East has been declining for decades as persecution and poverty have led to widespread migration. The Islamic State, also known as ISIS, considered Christians infidels and forced them to pay special taxes, accelerating the trend in Syria and Iraq.

In this area of Syria, the exodus has been swift.

Some 10,000 Assyrian Christians lived in more than 30 villages here before the war began in 2011, and there were more than two dozen churches. Now, about 900 people remain and only one church holds regular services, said Shlimon Barcham, a local official with the Assyrian Church of the East.

Some of the villages are entirely empty. One has five men left who protect the ruins of the Virgin Mary Church, whose foundations the jihadists dynamited. Another village has only two residents — a mother and her son. 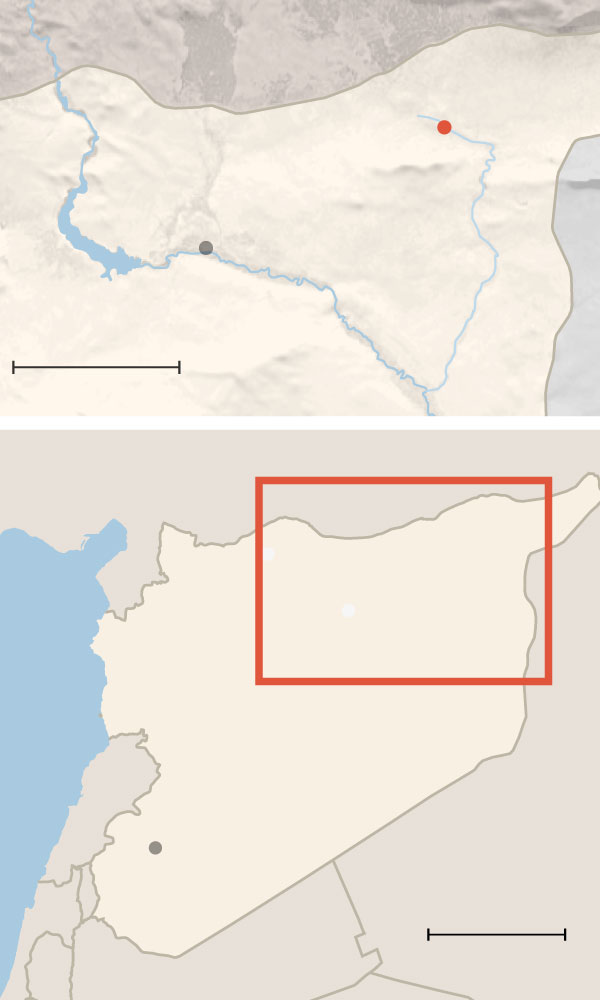 Mr. Barcham doubted that many people would return. “They all say nice things about wanting to come back, but I don’t think they will,” he said.

Assyrians are an indigenous Middle Eastern minority who trace their roots to the ancient Assyrian empire. Their main modern communities are in Iran, Iraq, Syria, Turkey and a few Western countries. They belong to a number of churches, including the Assyrian Church of the East and the Chaldean Catholic Church, and they speak a dialect of Aramaic.

When the Islamic State began its rampage across Iraq and Syria, the jihadists killed or enslaved Shiite Muslims and Yazidis, but they sought to make money off the Assyrians, probably assuming that their relatives abroad would pay dearly to have them released.

That tactic worked. Even before ISIS emerged, Assyrians had been leaving the Middle East for decades, and many in the diaspora rallied to help their brethren held captive in Syria, holding fund-raisers and sending cash from abroad for ransom payments, which were handled by a local Assyrian bishop, Mr. Barcham said.

The extremists demanded as much as $50,000 for the release of individual captives, but often accepted lower sums. The church has never revealed exactly how much it paid the Islamic State, but most assume it was more than a million dollars.

Not everyone was saved. Three hostages dressed in orange jumpsuits were killed in a video the jihadists sent to goad payments for others. One kidnapped woman never returned. Villagers assumed she was forced to marry an ISIS fighter.

Those days of fear and violence in the villages are gone, but the scars they left are everywhere.

Sitting alone in front of his house in Tel Tal, Oshana Kasho Oshana, 81, said he had been kidnapped by ISIS fighters and held for 30 days while his relatives negotiated his release, eventually paying about $13,000.

Many family members were already abroad, and he left after his release, joining two of his sons in Germany. Now, of his seven children, only one remains in Syria, but not in the village.

Mr. Oshana still comes back home from Germany at least once a year, even if that means staying alone in his house in a mostly empty village.

“It’s like a ghost town, but our village is valuable to us and we cannot leave it,” he said.

In another village, Tel Shamiran, only Samira Nikola, 65, remains with her adult son.

She, too, was kidnapped by the Islamic State with her husband and four other relatives, three of them children. After her release, she returned to find her home looted and her family’s truck and two milk cows gone, stolen by the jihadists.

She put the house back together and works with her son to raise chickens and grow cucumbers, grapes and olives in the garden around their mud farmhouse.

Her other children are in Australia or Germany, but she does not want to leave.

“Just keep the evil people away from us,” she said. “We don’t ask anything else of God.”

Her son, Nabil Youkhanna, 35, said he had stayed to be with her but was not sure how long he would last because the community was so small.

“We are staying, but for how long?” he said. “If we want to get married, there are no girls left.”

A local Assyrian militia patrols the area to keep out looters, but Mr. Youkhanna said he no longer trusts the Arabs in the nearby villages since he assumed they had helped the Islamic State.

“In the old days, we would see each other on the road and greet each other,” he said. “Now, no one says anything.”