MUST SEE PHOTOS Rebuilding and Forgiving After ISIS: ‘In the Name of Jesus Christ Everything is Possible’

Previous Next
MUST SEE PHOTOS Rebuilding and Forgiving After ISIS: ‘In the Name of Jesus Christ Everything is Possible’

It was four years ago this month when some 140,000 Christians were facing mass exodus as ISIS militants converged on Iraq’s ancient Nineveh Plains. 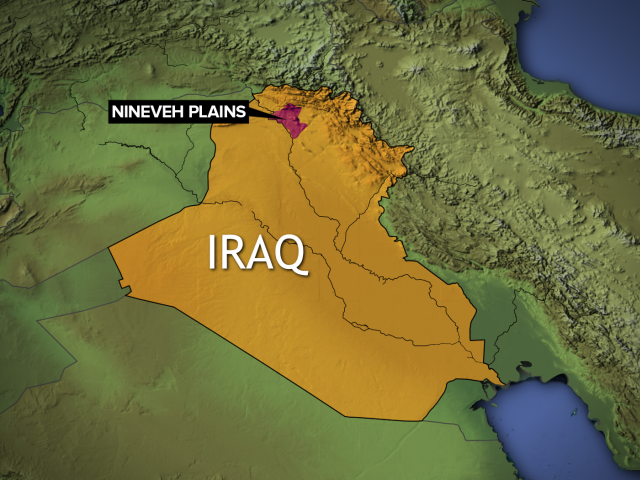 “The program was to eliminate the population and to also eliminate the historical memory — to get the people who lived there out of there,” Andrew Walther of Knights of Columbus told CBN News.

For the past four years, the Knights of Columbus, the largest Catholic fraternal organization, has been working to help persecuted Middle East Christians. Walther says what took Iraq’s Christians millennia to build in the Nineveh Plains was lost in a matter of hours. 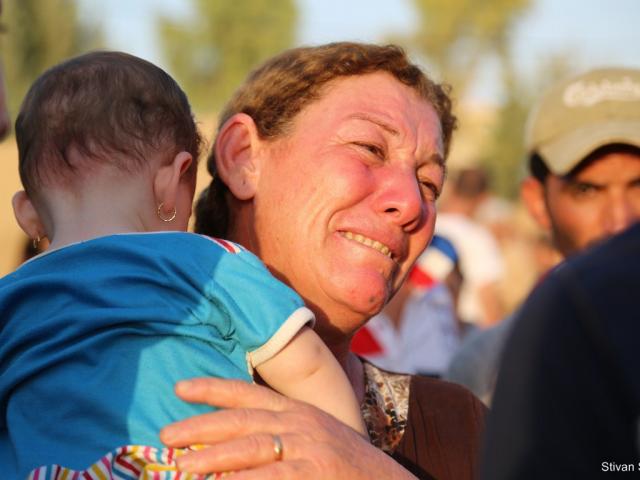 For over 2000 years, Nineveh Plains was the historical homeland of Chaldean, Syriac and Assyrian Christians. ISIS emptied it within days. 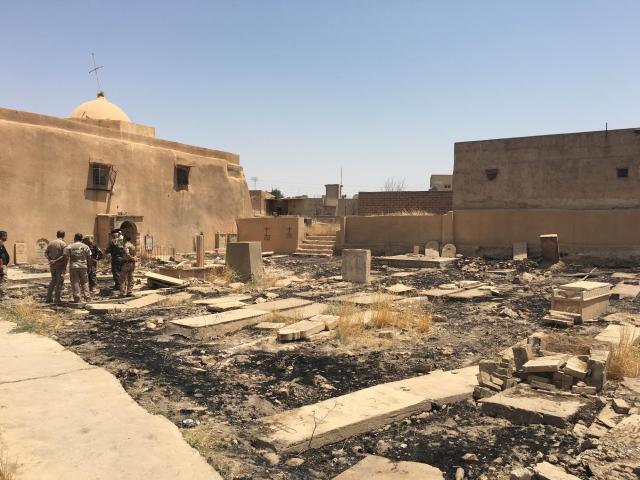 (The remains of a Catholic cemetery destroyed by militants in Karamles, Iraq. Credit: Chaldean Catholic Archdiocese of Erbil, Iraq)

“When ISIS swept through northern Iraq they decimated the Christian population. They gave people the option to convert, die or in some cases flee,” Walther explained. “ISIS wanted to stamp out any kind of difference and as a result, they undertook a program that didn’t just remove people. It also removed property. It also removed anything that spoke to an earlier culture.” 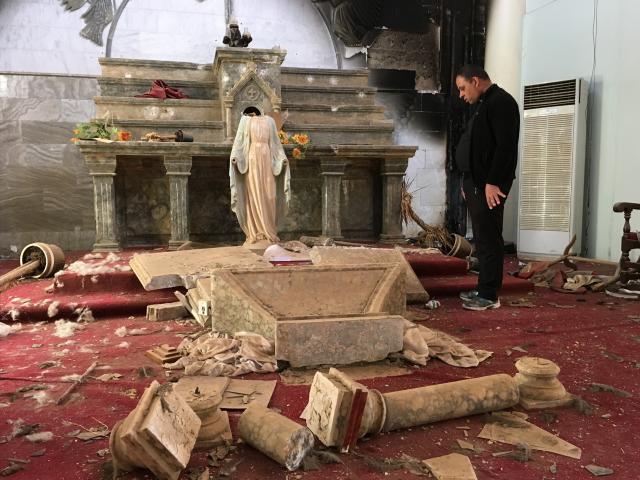 (A Catholic priest inspects the inside of a church desecrated by militants in Karamles, Iraq. Credit: Chaldean Catholic Archdiocese of Erbil, Iraq)

Over the next two years, the terror group destroyed over 13,000 homes, 263 church properties, and 140 public buildings.

“(ISIS’ goal was to) also blow up monuments, to blow up churches, to blow up things that indicated a religious belief that was at odds or just different from ISIS,” Walther added.

Today, four years later, with ISIS routed from much of the region, the scars from their reign of terror are still everywhere across the towns and villages of the Nineveh Plains. 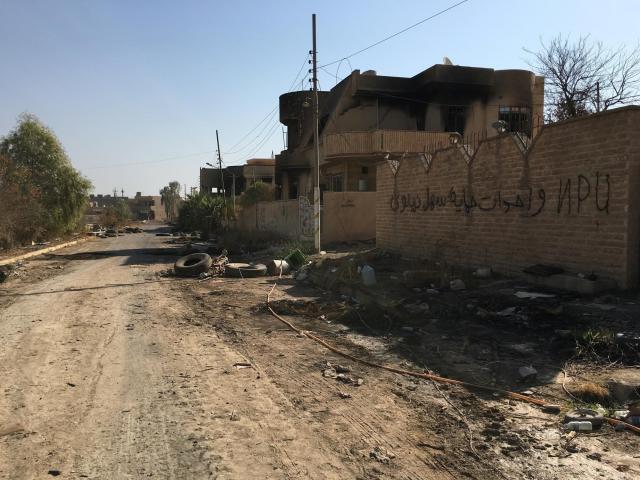 “It’s sort of a town by town basis, some towns have been sort of ethnically cleansed and resettled, other towns are still armed camps and war zones where the original population can’t move back in,” said Walther who has traveled extensively across Iraq.

“Some of the towns still have problems with unexploded ordinance, with mines, with things that make it impossible to move back,” he added. 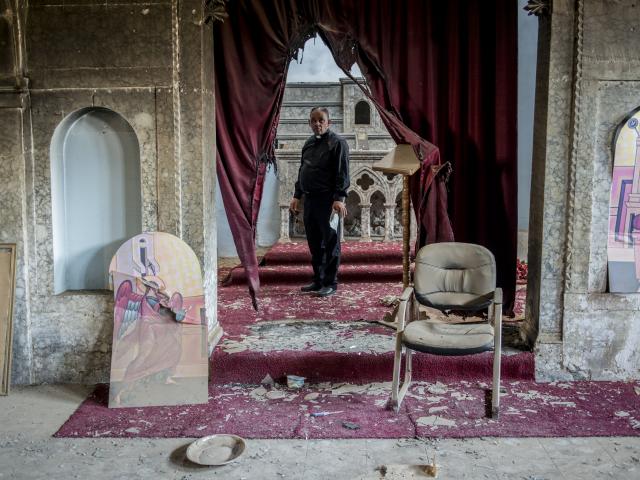 (Father Thabet Habib, a Chaldean Catholic priest, inspects the inside of a church desecrated and burned by ISIS militants in Karamles, Iraq. Credit: Martyn Aim)

Despite the enormous challenges, Christians of Nineveh are slowly staggering back to their ruined communities. With help from groups like the Knights of Columbus, hundreds of families in Karamles, a small Christian enclave in the plains, are getting their homes rebuilt or restored.

“This was a town that had hundreds of families, all of whom had been forcibly displaced by ISIS, and when the town was liberated, it was in a terrible state,” Walther said.

In 2014, the Knights of Columbus decided to get involved, helping Iraqi Christian families who wished to return to their homes in Karamles. 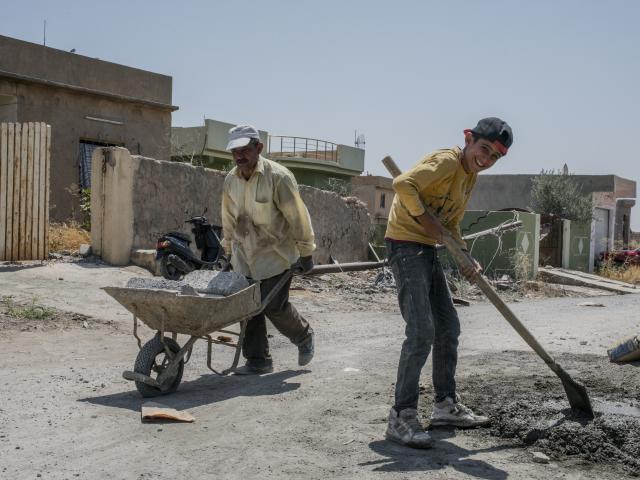 “The Knights of Columbus were able to put in about $2 million to move hundreds of families back home, to help them repair their homes and (to help them) get on with their lives, to pick up the pieces, and to help preserve the multicultural pluralism that has existed in the Christian communities in Iraq for well over a thousand years,” Walther said.

On August 7, some of those returnees joined a march in Karamles to remember the four-year anniversary of their exodus out of Nineveh.

“(This) celebration was not the remembrance of an awful event,” Paul Thabit Mekko, a Christian leader in Karamles, told AsiaNews. “(This) was a time to read the past with new eyes and a new spirit, with a real hope. What seemed impossible has become possible and we hope that other steps will follow.” 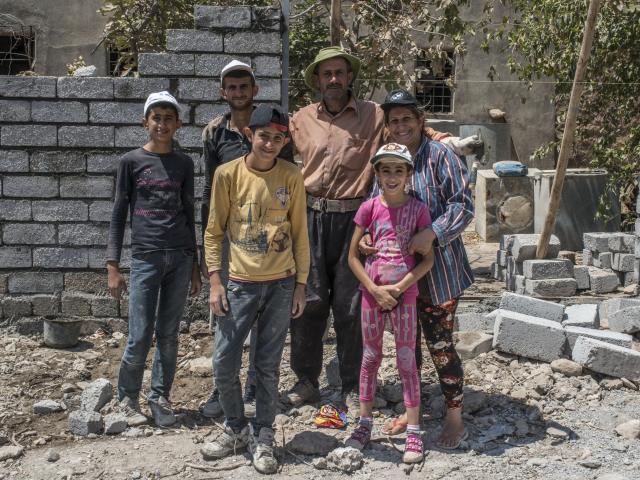 “The church is the only organization working with the Christians of Iraq and the other minorities to recover their homes,” Kajo said on his group’s website. “If these families do not return to their homes, Christianity will disappear from Iraq.”

Kajo’s group estimates that some 8,815 Iraqi Christian families have returned to the Nineveh Plains since ISIS was defeated. 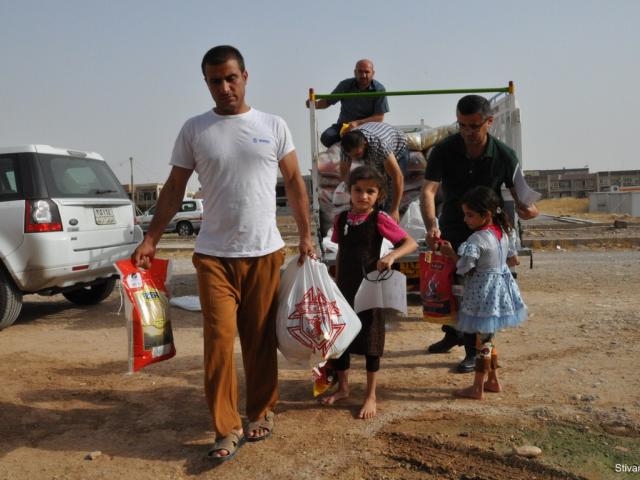 (The Knights of Columbus has provided food for an entire month for 13,500 families at a cost of more than $800,000 per month. Credit: Stivan Shany)

“All this has been possible thanks to the Church, which has made it possible for them to return,” Kago said. “But we have to continue working so that everybody can return.” 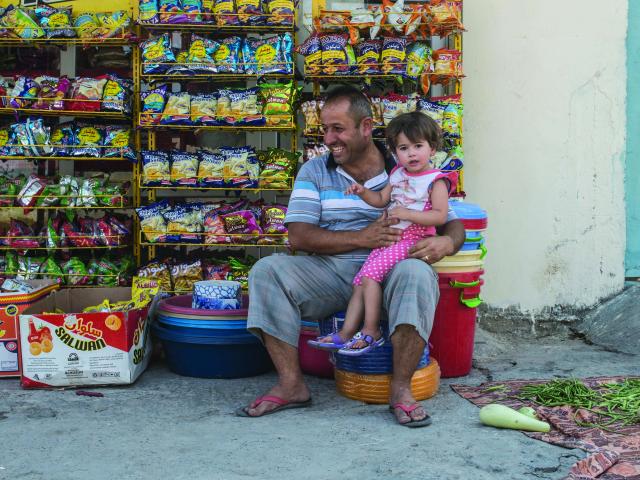 “We’ve got medical clinics that assist the needs of the Yazidi, Christian and Muslim populations,” Walther told CBN News. 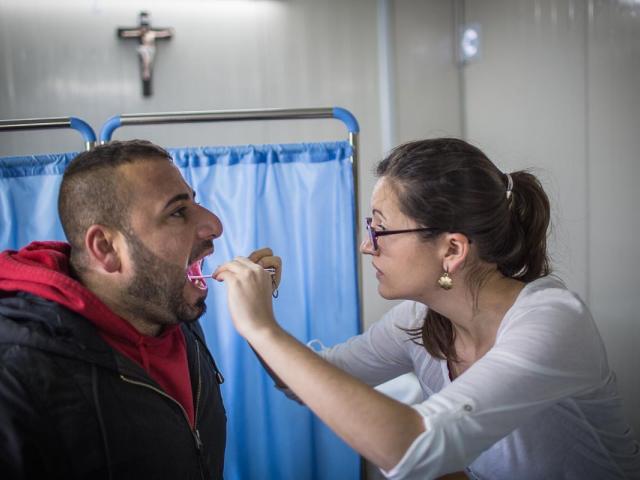 (Dr. Zuzana Dudová of the Knights of Columbus-sponsored STEP-IN Clinic in Kurdistan with an Iraqi patient. Credit: STEP-IN Clinic)

“We have housing that we’ve helped to build for some of the displaced communities, we have also a substantial amount of money that we’ve put into food aid for the Christian community.” 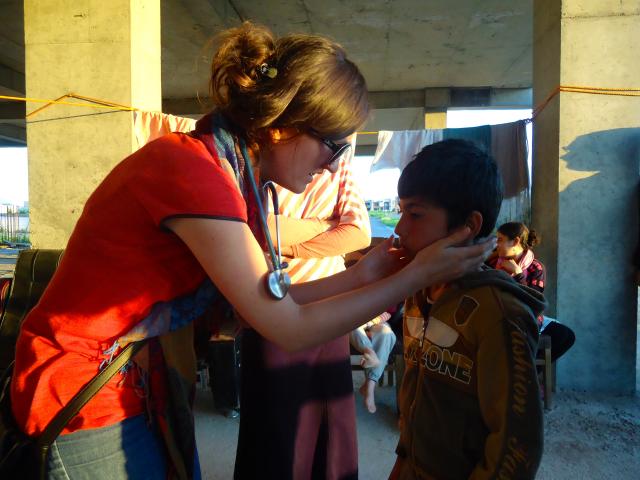 (Dr. Zuzana Dudová of the Knights of Columbus-sponsored STEP-IN Clinic in Kurdistan with a young Iraqi patient. Credit: STEP-IN Clinic)

Rebuilding houses, roads and other infrastructure in the Nineveh Plains are going to be an enormous undertaking, estimated to cost around $200 million. Ensuring that towns and villages are safe enough for families to return to is also a huge concern. Made all the more worrying by a new report that shows ISIS has as many fighters as it did at its peak. 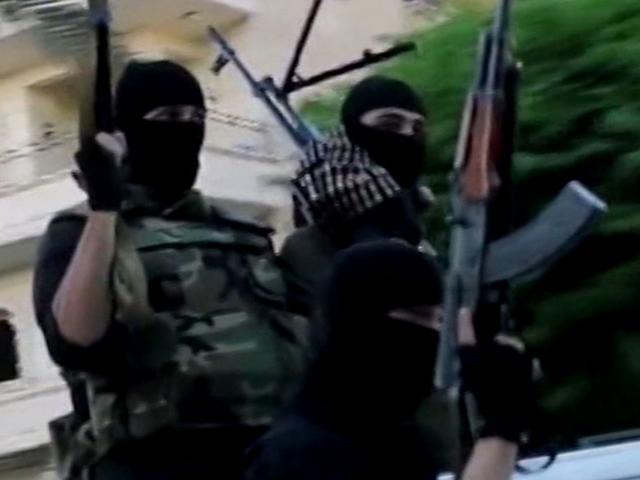 The UN estimates that between 20,000 and 30,000 ISIS fighters are still operating in Iraq and Syria, and according to experts “is well-positioned to rebuild and work on enabling its physical caliphate to re-emerge.”

“ISIS probably is still more capable than al-Qaida in Iraq at its peak in 2006-2007, when the group had declared an Islamic State and operated under the name Islamic State of Iraq,” Pentagon spokesperson Sean Robertson told VOA. “ISIS remains a threat, and even one ISIS fighter is one too many.” 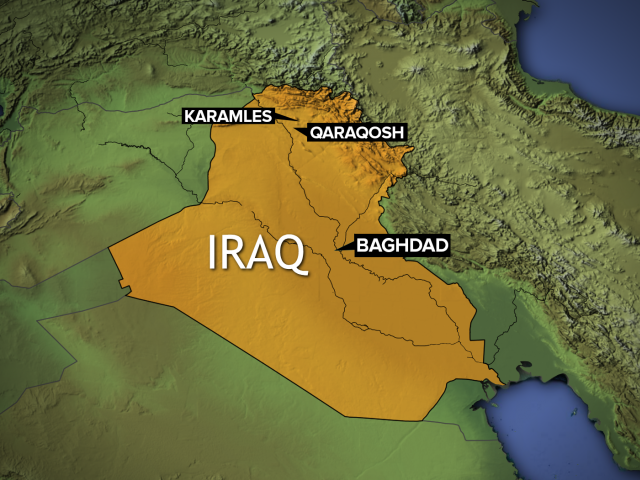 Walther told CBN News that even though ISIS extremists had every intention of wiping out all Christians from the Nineveh Plains, those returning home are ready to forgive and move on.

“Something that the Christians there tell me repeatedly is that forgiveness is a big element of this,” Walther told CBN News. 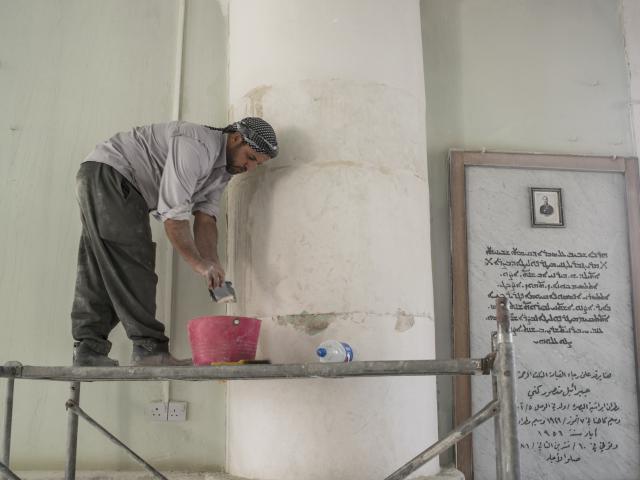 “The idea that the Christian community can forgive what was done to them and to help be a sort of leaven as a result of that, is something they take very seriously,” Walther added. 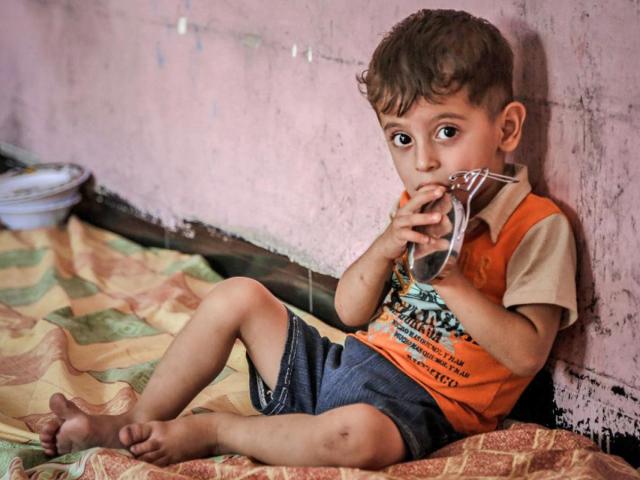 A sentiment echoed by Father Salar Kajo of the Nineveh Reconstruction Committee:

“In the name of Jesus Christ everything is possible,” said Kajo. “The people have suffered greatly; for three years as refugees in Iraqi Kurdistan they faced many difficulties. But they have a faith that has enabled them to overcome everything, although not without difficulty.” 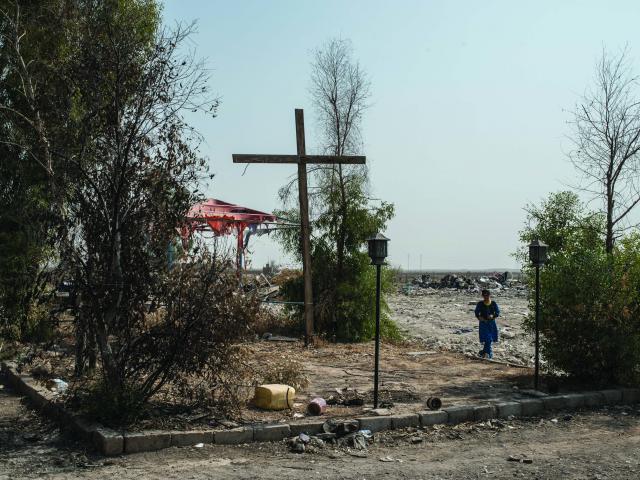 (A newly erected cross stands in a Karamles, Iraq, plaza that was devastated by ISIS militants. Credit: Martyn Aim)

“This faith also makes it possible for them to truly live this forgiveness,” he added.