SYRIA: A homecoming never to be forgotten.

Previous Next
SYRIA: A homecoming never to be forgotten.

Christian families in Syria forced from their town by extremists celebrated their return yesterday (Thursday, 14th February) with a ceremony marking the reconstruction of their homes.

At the service, parishioners packed into St Mary’s Church, in Krak des Chevaliers (Al Husn) village, and received ‘Jesus is my Rock’ stone tablets and bottles of holy water to signify the completion of repairs to houses devastated during a two-year campaign of violence at the height of the war.

“We should not hate our enemies, we should forgive them” – Archbishop Nicolas Sawaf of Latakia

Presiding at the ceremony, Melkite Greek Catholic Archbishop Nicolas Sawaf of Latakia, thanked Aid to the Church in Need, which funded the programme to repair 55 houses.

He said: “Given everything that the people have suffered, the violence and the hatred, who would have thought these houses would be constructed?

“For me it is a dream and my sincere thanks to Aid to the Church in Need.”

Reflecting on how neighbours were implicated in the attacks on the Christian homes, he added: “We must remember we as Christian citizens of Syria have a special mission of love, compassion and reconciliation.

“We should not hate our enemies, we should forgive them.”

“You are not alone… God is always with you… friends and benefactors of ACN are always praying and supporting you.” – Father Andrzej Halemba

Presenting the ‘Jesus is my Rock’ tablets to representatives of each family, Father Andrzej Halemba, ACN Middle East projects coordinator, said: “These tablets will remind you that you are not alone, that God is always with you and that the friends and benefactors of ACN are always praying and supporting you.”

Among those who received a tablet was Hasan Marmari, 60, who returned to his home a few weeks ago after ACN completed repairing it.

Mr Marmari, who described how his son, George, went missing five years ago during military service, said: “Of course there is still so much pain and suffering for so many of us but to be finally back home and able to re-start our lives is a huge step forward and an important sign of hope.” 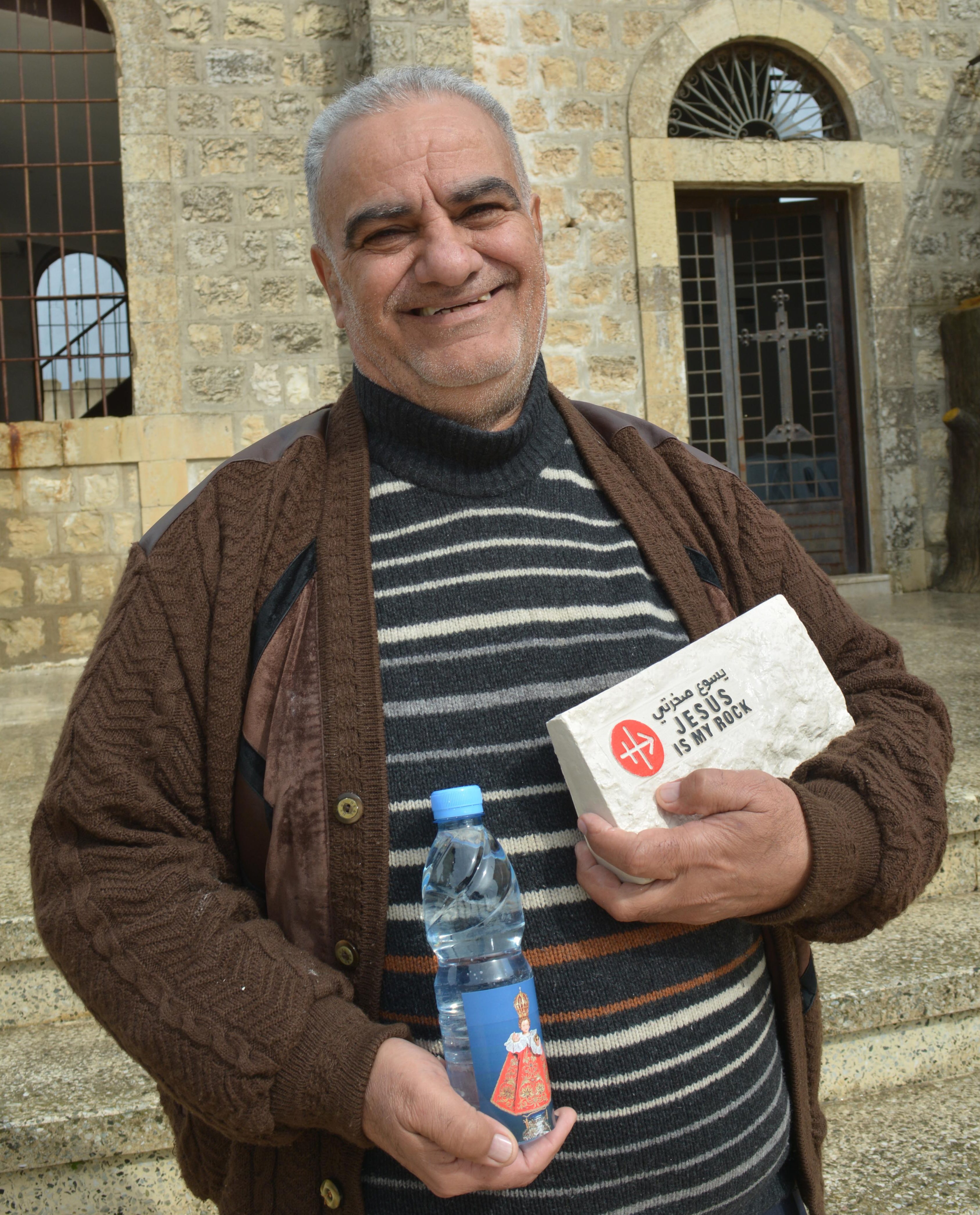 The Christian area of Krak des Chevaliers village came under attack in 2012 when extremists, including Muslims in the district, turned on them as part of the rebels’ campaign to take the nearby medieval Crusader castle, of crucial strategic significance as they sought to gain a stranglehold over the region.

As well as repairing the houses, ACN restored St Mary’s Church, which dates back 900 years and which was badly attacked and desecrated during the violence.

Since the conflict began in 2011, the charity has completed nearly 750 projects in Syria, such as emergency help for displaced Christian families in the Valley of the Christians, which includes Krak des Chevaliers village.