EXCLUSIVE INTERVIEW: Patriarch Twal: We Christians in the Holy Land May Exist, But Have Lost Our Influence.

In an exclusive interview with ZENIT in Amman, Jordan, the Patriarch Emeritus of Jerusalem, residing in Jordan, affirmed this.

Pope Francis visited Jordan, home to the Baptism site of Jesus, in 2014, during the journey to the Holy Land. He did so in the footsteps of Benedict XVI (2009) and St. John Paul II (2000). Jordan, with a large Islamic majority, where Catholics are less than 1% of the population, has a reputation as a peaceful and tolerant country in the Middle East.

In this interview, Patriarch Twal speaks about the very small presence still in the Holy Land, and while grateful for the Christians still there, laments: “I think we have no more influence on international politics.”

Lamenting the reduced Christian presence in government, he notes: “They have their own agenda and we do not figure into this agenda. Their existence or nonexistence does not matter to the international politics.”

He also discusses the Pope’s Document on Human Fraternity, signed with the Grand Imam of Al Azhar Al Tayyeb on Feb. 4, 2019, in Abu Dhabi during the first trip of a Pope to the Arabian Peninsula, the historic gesture of the Israeli and Palestinian presidents planting a tree for peace in the Vatican Gardens, and the international conference which took place in Amman. 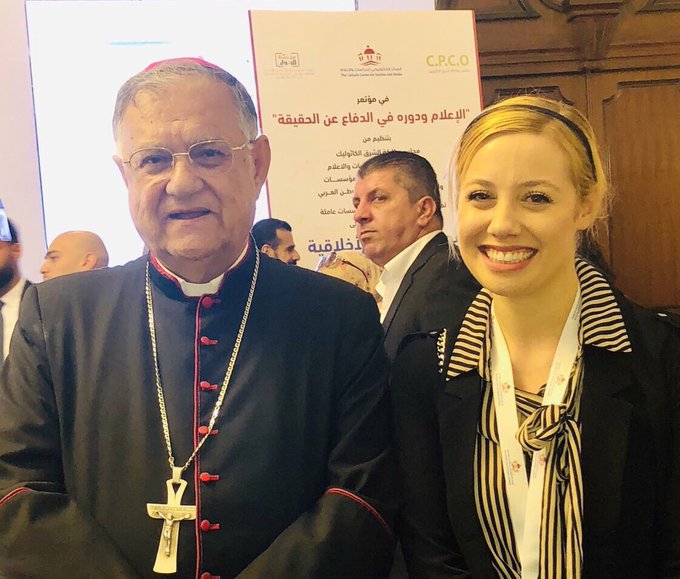 The international conference “Media and their role in defending the truth”, reflecting on dialogue between religions and people in the Middle East, has taken place in the Jordanian capital, June 18-20, 2019. The meeting was promoted by the Council of Catholic Patriarchs of the East, the Catholic Center for Studies and Media in Jordan, with the collaboration of the Platform for Dialogue and Cooperation between Religious Leaders and Institutions of the Arab World” and the Jordanian Office of Tourism.

Zenit Senior Vatican correspondent Deborah Castellano Lubov has been in Amman to speak at the conference during the session on “Media and truth: what is the relationship?”
Below is the exclusive Zenit interview with the Jordan-based religious leader done in Amman:

ZENIT: Your Beatitude, why are you here today?

Patriarch Twal: Well, I am just invited to hear and follow  this event which I appreciate very, very much, because communication is really important. We are in Jordan, but I think we are with a perspective very open toward the world. Jordan is a central point of the Middle East. And encounter, in and of itself, is very very common. We know the challenges against this event, against communications, against mass media. Mass media must be used for the benefit of the people. A question is about the freedom of communication. This is the point. I think each government is interested in having the journalist, having journalism, under its protection, at the service of the regime, more than at the service of the truth, or of the reality. This is the big challenge, of whether we are totally free or if there are special interests.

ZENIT: What would you say is the situation of the press in the Holy Land? Is it fair, or is there an agenda of some parties?

Patriarch Twal: No, no I have experienced this when it was my mandate when we had journalists who would do interviews in the Patriarchate of Jerusalem. What I used to recount was truly just our daily life. What I then used to hear was ‘I don’t know if I will be able to publish what you are saying now,’ noting it may be corrected, cut, or modified. I have this personal experience. It is sad, but this is the reality. These were journalists from all over the world, including from Italy, Germany. They understood the sensitivity related to Israel and the Holy Land. Yet, they used to qualify: ‘I do not know if I will be able to publish all that you say…’

ZENIT: What is the importance of the ten-point Code of Media Ethics (See Below), being endorsed by this media conference in Amman?

Patriarch Twal: I am not sure that we can put this in practice because after many, many years with this controlling of our freedom, we cannot, with a piece of paper, change the whole situation. We need other kits, and education. We need much more education and more independence, also economic independence, to see the truth. There are numerous elements which makes it not easy. It is nice to start. We hope and we do our best. We must work with the schools, universities, with the institutions. It is easy to write my name on a code, but not easy to change an entire atmosphere.

ZENIT: What is the situation of the Christians in the Holy Land right now?

Patriarch Twal: Well, we are less than two percent. I think we no longer have  influence on international politics. Not anymore. It is great if we can exist and continue to live in the Holy Land, to be a small element, salt, salt to the society, salt to the earth. However, regardless, we do not have influence like we did before. In government, our presence is so reduced. We cannot change [politics].

ZENIT: Given all the Christians who have had to flee the Middle East, the survival of the region’s Christian roots is really at risk. How can this phenomenon be stopped?

Patriarch Twal: It is easy. We need peace. If we make, if we have peace, they will stay. As long as there is no peace, they flee. They are afraid. They leave. The issue is also that this question of Christians leaving the Holy Land, does not interest the international politics. They have their own agenda and we do not figure into this agenda. Their existence or nonexistence does not matter to the international politics. They follow their political agendas, and depending on how that goes, we may be victims, or we may not be victims. It doesn’t mean so much to them. We have until now, thank God, Christian people, Christian families, but we do not have any longer, a Christian government. What we have is a government, but not a Christian government, a Jewish government. It is no longer a Christian government. People? Yes, we still have people. [We still have] good people, families, groups, associations. Thank God. But this is the dilemma of our presence here.

ZENIT: What is some of the good news of the Christians? What often is not told by the press that you would like to share?

Patriarch Twal: We still have some people there, living there. They are a witness that we are still there. I am sure we will always be there. I am sure we remember the words of the Lord when He said don’t worry, despite everything, I never will leave you alone my friends. I am with you all the time. So this question of faith is there. Hence, this is our support, our prayer, and our courage, to stay and work, despite everything else. Know, that we are not alone, in this mission. Someone [looking up] is with us.

ZENIT: In this conference, there has a been a great concentration on the media and the truth. In the context of interreligious dialogue, when speaking of the truth, with Islam, is it right and appropriate to speak of the whole truth or is it necessary to be more diplomatic?

Patriarch Twal: I was very happy to see some journalists who were here speaking, and how aware they are of the situation. They are aware, as well, that each government, each regime, is interested to have them under their control. They are aware of all this. I was happy to hear them speaking about the true situation and to say the truth. Each truth is a little a bit relative for governments and for us. I know the government, the regime, even when I was patriarch, they always wanted me to be on their side, all the time. It is true that not all truth is good to say, depending on your public, and on who will receive this truth. Here, sometimes, the truth is not always used for the benefit of the people. It is very, very important, but very, very complex at the same time. But we rely on you journalists to say as much as possible, to say the truth, to help the people, to accent the truth, even when sometimes the truth makes you suffer.

ZENIT: The Abu Dhabi document, as many refer to it, on Human Fraternity, did you see this as a positive step forward or otherwise?

Patriarch Twal: It is good, but it is then between leaders. For our public, on the street, in the village, the simple people, it is far away this question. Very far away…We Christians have been living with the Muslim people from the early centuries, without this document, we don’t need [it].

ZENIT: Last question. It is almost five years exactly since the planting of the tree in the Vatican gardens with the Presidents of Israel and Palestine, in a historic gesture of peace. What is the impact of that moment, five years later?

Patriarch Twal: Well, I attended this ceremony. We left Jerusalem when the Pope couldn’t gather the presidents in Jerusalem or Bethlehem. He said: ‘We will do it in the Vatican.’  Hence, we went to the gardens, and they planted this small tree. The tree, I think is still growing, thank God, but not the project in itself, not the persons. It is in the past.

ZENIT: Is there an appeal you would like to make?

Patriarch Twal: Do not lose hope. We stay in this hope. The tree is growing in the Vatican, but the people and projects are already in the past.