AMMAN, Jordan (CNS) — Lebanese were reeling after a massive explosion at Beirut’s port destroyed homes, businesses and livelihoods across the capital, and Catholic leaders immediately took action and called for international support.

Aid groups say the blast Aug. 4 threatens to open a new humanitarian crisis in an impoverished nation that hosts hundreds of thousands of Syrian refugees and is already struggling to stay afloat amid an economic collapse and soaring rates of poverty and unemployment. The explosion destroyed numerous apartment buildings, potentially leaving many homeless at a time when Lebanese have lost their jobs and savings due to the currency crisis.

Lebanon’s top Catholic cleric, Cardinal Bechara Rai, Maronite patriarch, has called for a U.N.-controlled fund to be set up to manage aid for the reconstruction of Beirut and other international assistance to aid the stricken country.

“Hundreds of families are homeless. All this is happening and the state is in an economic and financial situation which makes it incapable of dealing with this human and urban catastrophe,” he told Vatican News.

“The church, which has set up a relief network throughout Lebanese territory, now finds itself faced with a new great duty, which it is incapable of assuming on its own,” said Cardinal Rai, urging for help “without any political consideration, because what happened is beyond politics and conflicts.”

“It is unclear who is behind the blast, but what is certain is that there were explosive materials which turned Beirut into an apocalyptic city. Hospitals, schools, houses, businesses, and much more (are) destroyed, leaving people feeling hopeless and helpless,” wrote the two U.S. Maronite prelates, Bishops Gregory Mansour of the Eparchy of St. Maron of Brooklyn and A. Elias Zaidan of the Eparchy of Our Lady of Lebanon of Los Angeles.

“It saddens us to see Lebanon, once designated by Pope St. John Paull II as being ‘more than a country, it is a message,’ a message of conviviality between Christians and Muslims, between East and West. This country is at the verge of a failed state and total collapse,” their statement read. 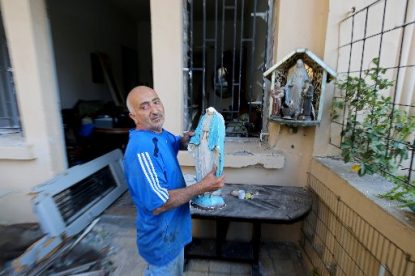 LEBANON EXPLOSIONS AFTERMATH
A man holds a damaged statue of Mary in his Beirut home Aug. 5, 2020, following explosions the previous day. Two massive explosions near the port of the Lebanese capital injured dozens of people and shattered windows in buildings blocks away. (CNS photo/Aziz Taher, Reuters)

“We urge you to pray for Lebanon, and we ask for your support for our brothers and sisters at this difficult time and in response to this catastrophe. We appeal to all nations, all people of goodwill, to stand in solidarity with the Lebanese. We hope and pray Lebanon will regain stability and initiate a path of recovery toward peace and justice for all.”

Damage was sustained by several Catholic agencies, including the CNEWA/Pontifical Mission and Caritas Lebanon, but staff were safe. A nearby Franciscan church and friary were reportedly destroyed, but there was no loss of life.

“It is a terrible and disastrous situation and today we live in a total confusion,” said Rita Rhayem, director of Caritas Lebanon, whose staff immediately took action to bring relief to those affected by the explosion.

The Caritas confederation is also launching an emergency plan coordinated by the general secretariat of Caritas Internationalis to immediately assist victims.

“The situation is critical and this is the first time that we have experienced a situation of such great magnitude, it is apocalyptic, but we don’t stop, and we will carry on in order to help all those in difficulty, ” Rhayem said in a statement.

“There are a lot of dead and a lot of injured, and the health situation is likely to worsen quickly, as the toxic gases can cause additional health problems. Caritas Lebanon is preparing for this, but its health centers have no means to face this kind of situation, and rescue operations are made even more difficult by the lack of electricity,” Rhayem explained, underlining the severity of the situation.

In an Aug. 5 statement the Assembly of Catholic Ordinaries of the Holy Land said its members were following the situation “with great concern and sorrow.”

“We raise prayer for the souls of the dead and for recovery of the injured people, and we pray for stability and prosperity of Lebanon and express our solidarity with all citizens of Lebanon in these difficult times,” the leaders said in the statement.

Praying for the victims and their families, Pope Francis also asked for prayers “for Lebanon so that with the effort of everyone in society — political and religious — it may face this tragic and painful moment and, with the help of the international community, overcome the serious crisis it is experiencing.”

A Beirut Mass live-streamed on Twitter by Rayane Moussallem caught the moment the massive explosion went off. It showed a priest waving a censer full of incense during the Mass when suddenly the church violently shook and debris from the ceiling flew down, hitting the fleeing priest. Glass and other material littered the church’s marble floor. The priest reportedly is fine following the blast.

But thousands of shocked Beirut residents were badly hurt by flying glass and broken doors and furniture resulting from the blast.

Makrouhie Yerganian, a retired teacher who has lived near the port for decades, said it was “like an atomic bomb” had gone off.

“I’ve experienced everything, but nothing like this before,” even during the 1975-1990 civil war, she told the French news agency AFP. “All the buildings around here have collapsed. I’m walking through glass and debris everywhere, in the dark.”

“I lived the 15 years of civil war and the Israeli wars on Lebanon, but I never witnessed such a devastating explosion,” tweeted Fadi Daou of the Beirut-based Adyan Foundation, which promotes solidary in the midst of diversity. “I can say the third of Beirut is destroyed, with hundreds of victims and thousands of wounded.”

While Beirut “is sad, missing hundreds of its children dead or disappeared, thousands of wounded, tens of thousands of displaced … it will resurrect by the solidarity and resilience of its people,” he added.

The Save the Children charity said that “the incident could not have occurred at a worse time.” Lebanon faces unimaginable economic and social devastation in its wake.

Lebanon’s Red Cross reported that at least 100 people were killed and more than 4,000 wounded, but it expected the toll could rise further as many remained missing.

Lebanese President Michel Aoun said a state of emergency should be declared in Beirut for two weeks, adding it was “unacceptable” that 2,750 tons of ammonium nitrate were stored in a port warehouse for six years without safety measures. He vowed that those responsible would face the “harshest punishments.”

However, many question why such large quantities of a lethal chemical would be held in the center of the Lebanese capital so close to homes, shops and a major highway. Experts like Anthony May, a retired explosives investigator with U.S. Bureau of Alcohol, Tobacco, Firearms and Explosives, told CNN that only 2 tons of ammonium nitrate caused the huge devastation in the 1995 Oklahoma City bombing.

He and other foreign explosive experts believe that the massive pinkish-orange smoke plume seen from the blast is not consistent with ammonium nitrate, which gives a yellow hue. They believe that “military explosives” such as munitions and high velocity materials were also present and wonder why they were stored in such a vulnerable, but highly important site.

Estimates suggest some 85% of the country’s grain was stored at the now-destroyed silos at the port; only 3% of the port now remains. Concerns have been raised about how Lebanon will continue to import nearly all of its vital goods with its main port devastated.