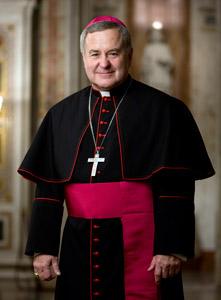 WASHINGTON, DC – The Holy Land Christian Ecumenical Foundation (HCEF) is pleased to announce that His Excellency Archbishop Robert J. Carlson, Archbishop of St. Louis and HCEF Advisory Board Member, will receive the 2016 Holy Land Christian Ecumenical Foundation Award at HCEF’s 18th International Conference and Awards Banquet, Forging a New Bond of Solidarity for Equality, Prosperity and Peace. The Awards Banquet will take place on Oct. 14, 2016 at the Washington Marriott Georgetown.

The HCEF Award is given to an individual who has dedicated his or her life to preserving the presence of Christians in the Holy Land. The award recipient has demonstrated courage, determination, and action to advance the cause of justice, sustenance, and spiritual support for the Living Stones.

This award gives public recognition to the many years of hard work and dedication Archbishop Carlson has given to HCEF’s mission. A Knight Commander of the Equestrian Order of the Holy Sepulchre of Jerusalem, Archbishop Carlson has led several pilgrimages to the Holy Land, as well as fact-finding missions, lending support to the mother church and introducing Christians of the West to their Palestinian counterparts. A close friend of the Latin Patriarch of Jerusalem, Archbishop Carlson has graciously hosted His Beatitude during the Patriarch’s visits to the United States, extending the same warm hospitality he receives when he visits the Holy Land.

HCEF invites you to advocate for the Palestinian Christians. Please join HCEF in honoring His Excellency Archbishop Robert J. Carlson by participating in the 18th International Conference in Washington, DC.