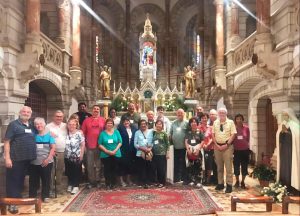 During May, a group of 22 American Catholic pilgrims from three parishes in Los Angeles made a memorable HCEF-organized Living Stones Pilgrimage to Palestine and Jordan. Led by Father Bill McLean, a priest of the Archdiocese of Los Angeles, the group visited Galilee, Nablus, Jerusalem, Bethlehem, Jericho, and the Ramallah area in Palestine. A portion of the group then continued to Jordan for an additional three days, visiting the Jordan River, Amman, Petra, Madaba, and Mount Nebo, before returning to the U.S.

During their pilgrimage, the group did not miss a single stop typically visited on other tours, and in addition, visited significant Palestinian Christian sites normally unreachable through Jerusalem-based pilgrimage programs.  When pilgrims journey with HCEF Living Stones Pilgrimages, they not only experience the awe-inspiring majesty of the region’s holy places, but also the richness of local hospitality and culture – the living, breathing legacy of Christ. Wherever they visited, the group’s Palestinian hosts expressed warm wishes that they would come back soon! 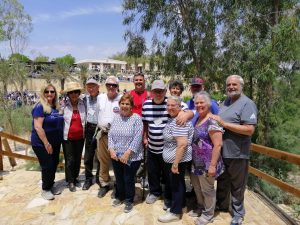 Father Bill commented that one of the highlights of the Los Angeles pilgrims’ journey was their visit to the parish church and school in Birzeit, and the HCEF Birzeit Social and Cultural Center.  The pilgrims celebrated Mass with Father Louis Hazboun and the local Palestinian Christian community at the Birzeit Queen of Peace Latin Church, and then visited the associated school serving both Christian and Muslim families, where they had the opportunity to meet a number of the students.  Afterward the group continued to the Birzeit Social Development and Cultural Center for lunch with community elders, giving the pilgrims an opportunity to hear their stories and learn about their lives in the Holy Land.

While visiting Jerusalem, the pilgrims had an audience with Fr. Emil Salayta, a co-founder of HCEF and President of the Ecclesiastical Court for the Latin Patriarchate of Jerusalem, where they learned about the work of the Latin Patriarchate, the needs of the Palestinian Christian community in today’s environment, and how they can build solidarity.

HCEF looks forward to welcoming future groups from Los Angeles and across the United States as we continue our mission to support the Christian Arabs of the Holy Land, by building ties between them and Christians around the world through our Living Stones Pilgrimage program. We invite you to visit the Holy Land on a pilgrimage unlike any other, Please visit https://holylandtours.ps/ and contact our Pilgrimage Manager, Andrew Griswold agriswold@hcef.org to begin planning your Living Stones Pilgrimage experience.