Previous Next
Dominican Sisters recount harrowing escape from ISIS in Iraq, resulting in death of 23 elderly nuns from heart attacks 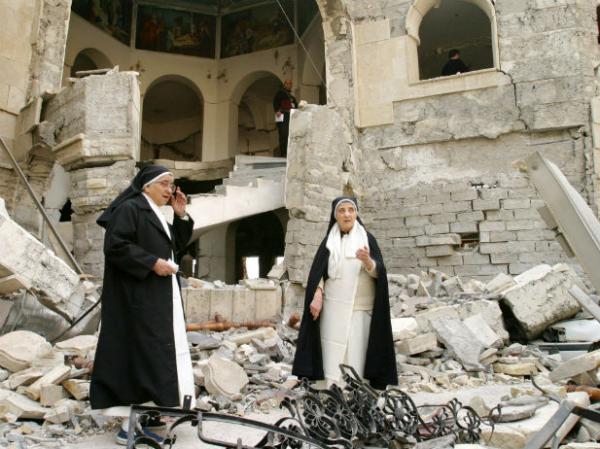 Two Dominican Sisters survey the damage on a church in Iraq following an ISIS attack.

The Dominican Sisters of St. Catherine of Siena-Iraq recently gave a gripping account of how they escaped from the tyranny of the Islamic State (ISIS) in Iraq, an ordeal that led to the death of 23 sisters over the past 18 months, according to the National Catholic Reporter.

According to the nuns based in the Iraqi city of Qaraqosh, the ISIS launched its first mortar shell attack on their community in 2003.

The Dominican Sisters have been serving the Iraqi Christian community in Qaraqosh and Mosul for almost 150 years. The nuns taught in schools and had good relations with their Muslim neighbours.

However, the sisters later began to sense trouble and started planning for potential problems that could arise from attacks by ISIS militants or their supporters.

In early June 2014, ISIS attacked the city of Mosul, Iraq, triggering a massive exodus from that city and later from towns like Qaraqosh, the largest Christian city in Iraq, and nearby villages.

The Dominican nuns remaining in Mosul had three choices: To pay a Christian tax, convert to Islam or leave to save their lives.

On June 8, 2014, the sisters left Mosul, joining a group of 30 people squeezed inside a bus that could only seat 14 passengers. Dangers were everywhere along the road, but they managed to reach the village Bashiqa the following morning, extremely tired and afraid.

The Peshmerga Kurdish fighters assured the Christian community in Qaraqosh and surrounding villages that they would be protected and that there was no way that ISIS would come and occupy the villages.

But despite this assurance, five Christian villages were shelled heavily by ISIS, which demanded to be paid the Christian tax or else the shelling would continue.

In a nearby Chaldean Christian village, priest was shot in the head and killed by either an ISIS fighter or a sympathiser. This incident worsened the fears already gripping the Christian community.

In the morning of Aug. 6, 2014, Qaraqosh was shelled, killing two children and one young woman. The whole community of Qaraqosh evacuated the village, except the Dominican Sisters.

Qaraqosh was in chaos, and the sisters finally decided to leave late in the evening. Thirty-five nuns, four families and two orphans squeezed themselves into two vans and two small cars and left Qaraqosh.

They came upon other Christians walking, some on donkeys and some on bicycles. “It was a river of people, thousands of people walking slowly out of Qaraqosh,” said Sister Maria.

They headed for the city of Erbil, 30 miles miles away from Qaraqosh. They arrived there the next morning.

The elderly sisters began to suffer heart attacks and heart failures from the stress of the mass exodus. Over the past 18 months, 23 of them died, sometimes up to three deaths a week. “They died of a broken heart,” said Sister Huda.