HCEF, Brigham Young University (BYU) and The Mormon Church Partner to Work Together to Support Palestinians

Previous Next
HCEF, Brigham Young University (BYU) and The Mormon Church Partner to Work Together to Support Palestinians 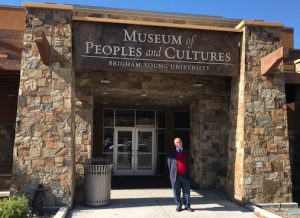 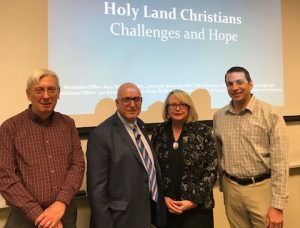 Also during his visit, Sir Rabie met with BYU’s Department of Anthropology and Archaeology to discuss a collaborative project between BYU and HCEF’s Bethlehem Museum that has been under development over the past year. Under the leadership of Dr. Cynthia Finlayson, Associate Professor of Archaeology, BYU-Provo and the BYU Jerusalem Center have approved a study abroad program that will utilize Bethlehem Museum as a training lab for Palestinian and American Museum Studies students. This is the first program of its kind to be approved by the Jerusalem Center. The program stands to fill a significant gap in university studies in Palestine, which despite its renowned position as an archeological treasure trove, has yet to offer an official Museum Studies program at any of its universities. The program will help Palestinian students learn how to care for and exhibit their cultural heritage artifacts. Sir Rabie also met with Paul Stavast, Director of the Museum of Peoples and Cultures at BYU, regarding plans to design an exhibit at their Museum to highlight Palestinian heritage, culture and history. The exhibit is set to run from September 2018 to April 2019. 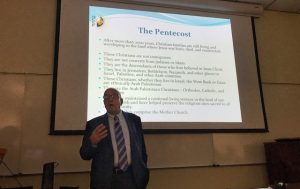 Last, but certainly not least, Sir Rabie met with officials and Elders of the Mormon Church to discuss how to strengthen humanitarian support for struggling families in Palestine. The visit included a meeting with Elder Anthony Perkins, Executive Director of the Correlation Department and Member of the Middle East/North Africa Area Desk; Boyce Fitzgerald, Director of Temporal Affairs; and Robert Hoskanson, Manager of the Refugee Initiative at Morman Charities. During the meetings, HCEF and Mormon Church representatives agreed to cooperate on various humanitarian projects, with a focus on the health sector and on primary education. With the Mormon Church’s support, HCEF hopes to contribute much needed resources to hospitals, health clinics, special education schools, and orphanages throughout the Palestine. The meetings proved a heartening demonstration of support and encouragement for Christians in Palestine.