The Christmas that Almost Wasn’t: HCEF Distributes over 450 Christmas Gifts to Children Around Palestine

Previous Next
The Christmas that Almost Wasn’t: HCEF Distributes over 450 Christmas Gifts to Children Around Palestine 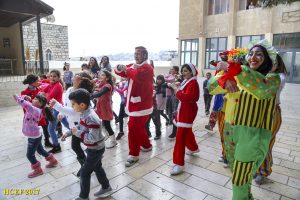 Bethlehem, Palestine—On Saturday, December 23rd, just a day before Christmas Eve, children around Palestine got the thrill of the season, after receiving an extra special visit from Santa with gifts, treats and festivities to spare. But it was a visit that almost never was…On Friday, December 15th, HCEF was poised to hold its annual Christmas event, The Children’s Journey to Bethlehem, as part of its Bethlehem Heart of Christmas program. Every year, the event brings hundreds of Christian and Muslim children from around Palestine for an educational tour of Bethlehem’s holy sites and an unforgettable Christmas celebration at a local community center. The program is meant to foster understanding of Palestine’s Christian heritage and to encourage national solidarity. However, this year, as a result of the political unrest at checkpoints throughout the region, many of Bethlehem’s Christmas celebrations were cancelled, and HCEF made the difficult decision to cancel the journey, unable to ensure the safety of 450 children traveling to Bethlehem on insecure roads. 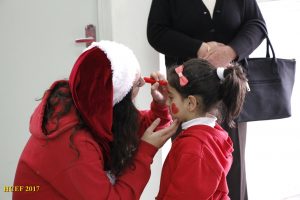 However, unwilling to cancel the event altogether, HCEF insisted that if the children couldn’t come to Bethlehem, HCEF would bring the spirit of Bethlehem to them. In just under one week, HCEF reorganized the event into four separate events—a feat that took an entire legion of staff, volunteers and community members to accomplish. The separate events were held in Birzeit, Jenin and Bethlehem with the participation of children from Christian minority areas in Jenin City, Zababdeh, Kurfarqud, Burquin, Birzeit, Beit Sahour, Beit Jala and Bethlehem. Altogether, HCEF distributed gifts and held celebrations for over 450 children representing Christian schools, centers for children with special needs, orphanages, scout troops and youth programs from some of the nation’s most marginalized areas. In Bethlehem and Birzeit, children enjoyed an interactive Christmas play, treats, games and face-painting with clowns, and received gifts from Santa. In Beit Jala, special needs children had an extra special celebration at Lifegate Rehabilitation Center since some of the children were Center-bound and could not participate in the Bethlehem festivities. In Jenin, Santa made personal visits to families in four villages, hand delivering gifts to children throughout northern Christian minority areas. In Birzeit, the celebrations also included a Christmas lunch for elderly residents at the Birzeit Social Development and Cultural Center, each of whom received a scarf and toiletries to help them through the winter. 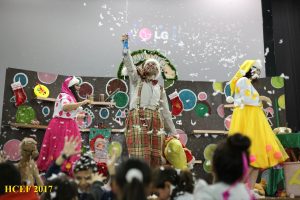 Reflecting on the event, Khader Handal, one of the program’s Co-Coordinators, commented: “We were so disappointed when we had to cancel the journey, but what we found was that the challenge motivated us to find a way to keep the spirit of the journey alive despite having to change the program. We had so much support from volunteers, vendors, local and international organizations, we felt that we were truly living the Christmas message—that despite unanticipated obstacles and challenges, if we work together for the good of the many, our work will prevail.” Although the event was not typical in its format, its function was as it always is—bringing the light and hope of Christ to all people of goodwill. 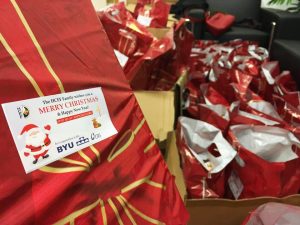 The event was generously supported by BYU Jerusalem Center, Catholic Relief Services in Jerusalem/Bethlehem, U.S. churches, private donors, and local supporters. We would especially like to thank Know Thy Heritage alumni for fundraising in their communities throughout the world to support the event. This program would not be possible without the generosity and goodwill of so many.

Rateb Rabie, KCHS, HCEF President/CEO, further commented, “In spite of all the challenges that HCEF and our people have faced, we continue to carry on our mission to support our Christian presence, and our co-existenc, by bringing hope and laughter to children in celebration of Christmas. We are grateful to all who were a part of this event, and especially to our donors, who made it possible.

To learn more about HCEF, the Birzeit Social Development and Cultural Center (BSCC and Bethlehem Heart of Christmas, or to donate please visit https://hcef.org/programs/bhc/

Click on the cities below to view the photo albums: